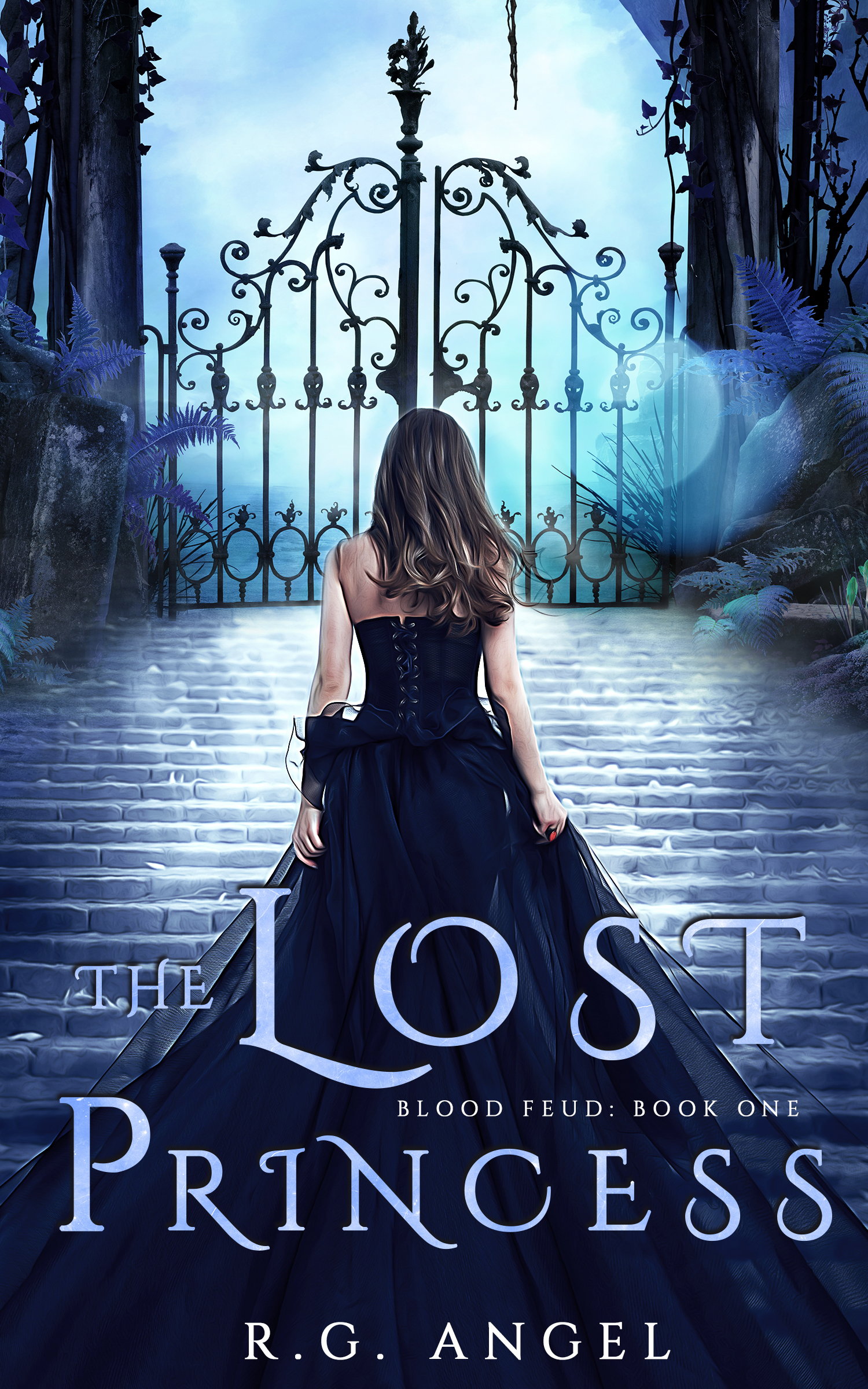 Fay Newman is about to start college, a new chapter of her life—a way to reinvent the nature lover and unsociable introvert she has always been.

However, when she saves her roommate’s life in a way that no human could, she finds more than she bargained for when she is thrown in the midst of kingdoms’ wars, blood feuds, forbidden love, and forgotten promises.

With the fate of humanity hanging in the balance, Fay tries to navigate her new reality, with friends and foes being closer than she realizes. When nothing is as it seems, she doesn’t know who or what to trust until taking up the weapon to fight is all that’s left.

Any choices available to her will ultimately lead to sacrifices. Fay must figure out what she is ready to sacrifice—her heart, her soul, or even…her life.

“Fay, come on! You’re going to miss your plane!” my mother shouted from the bottom of the stairs.

“I’ll be down in a minute,” I shouted back, throwing my heavy duffel bag on my shoulder before giving one last longing look at my childhood room.

My wooden shelves were full of books I couldn’t take with me. My records were on my desk, with the hundred pictures I’ve drawn of all the animals I’d seen in the forest.

My parents kept reassuring me that it would all be there, that nothing would have to change and I could get it all back once I was done with school. But it was where all my memories were. I felt so safe in this room, almost like I belonged in between my books and music.

Now I had to go to college. I was becoming an adult; well, at least that was what my parents told me.

I shook my head sullenly. I wanted to get an education; don’t get me wrong, I’ve been dreaming of it for a long time. But I would have wanted to stay here at home in New England and study at the University of New England, just like my brothers were. It was all set until I got a letter awarding me a full scholarship for Oregon State University in Corvallis. This university had a well-rated bachelor’s degree in bioresource research, and I could even take my minor in zoology which was not the case here.

It’d been weird to get that letter; I hadn’t applied anywhere other than NE but they’d explained that they had read the paper I wrote when I entered the National High School Competition on Climate Change. I’d won with my paper on climate change on endangered species, but I was just happy to get the trophies. I had no idea it would impact me to the point of a full ride to college.

I thought my parents would refuse to send their baby girl to Oregon, more than three thousand miles from home. They had panic attacks as I grew up when I even walked away from them; even at the supermarket I had to stay close. They were always so protective of me; even my older twin brothers had kept an eye on me like a falcon on prey.

But no, contrary to what I hoped they would do, they were pleased! I felt like they were even trying to kick me out of my home and it hurt me deep down. What happened to my overprotective parents?

“Yeesh!” I stormed out of my bedroom, running down the stairs. “Are you that happy to get rid of me?” I was not able to conceal the hurt in my voice or the tears stinging my eyes.

“Don’t be silly, you’re my baby girl,” my father soothed, hugging me tightly before kissing my forehead. “We’re going to miss you terribly. But leaving is a part of growing up and it’s a once-in-a-lifetime opportunity.” He tugged at my long ponytail with affection as he always did. “Believe me when I say you’ll regret it if you don’t go,” he added with a small smile. Even if I knew he was right, but it still didn’t please me much to be so far from the people I loved the most.

I sighed in defeat and nodded in resignation. I looked up at my two brothers who were grinning goofily in the middle of the hallway.

They always had the gift of making me chuckle even when I was feeling very low.

I looked at them just a little longer, as if to make sure I had them imprinted in my memory forever.

We didn’t look related, my brothers and me. Many people in school didn’t know that the twins and I were related.

Where my brothers had pale-blond hair, mine was brown. Their eyes were hazel like our mothers; mine were an eerie silvery blue.

My parents and brothers were also very sporty. My brothers were even good enough to get partial scholarships—Nick to play basketball and Mick to play football. As for me, well… I was just useless in sports and even I had to admit that any kind of sport bored me to the extreme, which was almost a blasphemy in the Newman household.

I was the artist of the family. I was always drawing, playing guitar, and reading. God, I just loved my books and I knew I would miss them so much while I was that far from home. So I packed some of my favorites to take with me. Some girls needed their makeup; I needed my books. It was as simple as that.

It was not only at home that I felt like I didn’t belong; school was exactly the same. I was probably the only person in the whole world who spent eighteen years in a city without having any close friends, only some remote acquaintances.

I was not a pariah at school; nobody bullied me or anything. Well, I supposed that having two superstar brothers only a year older than me helped a lot with the social status issues, but I was somehow invisible, faded to the background of the high school social scene. I was not bitter about that because I knew that I was mostly the one to blame for that. I never tried to fit in, to be a part of the game. I was pleased to be left alone. I didn’t need to speak; I didn’t want to speak! It just didn’t feel right most of the time. It was like I was pretending just for the outside world and I didn’t want to bother with that. I was a loner and probably always would be.

I enjoyed being with animals so much more which was why I’d been volunteering at the local shelter. Animals I understood… People? Not so much.

My brothers were now giving me their famous ‘brotherly-love’ hug which mainly consisted of choking me by hugging me tight between them.

“Can’t… breathe.” I said with difficulty against Mick’s chest, my voice muffled.

“Come on, boys,” our father chided with a low chuckle. “It’s time for us to go to the airport.”

“Okay…” they replied simultaneously, letting go of me reluctantly.

“Listen, baby sis.” Nick started turning me around, resting his hands on my shoulders. He looked so serious that I almost had an attack. My brothers were never serious! “You know boys…” He quickly glanced at Mick, standing behind us.

Nick gave him a sharp nod. “Yeah, exactly. Boys are pigs,” Nick repeated without a hint of humor in his voice.

“Oh boy,” our mother huffed, rolling her eyes as our father picked up my duffel bag from the floor. “We’ll wait for you in the car, baby. Don’t take too long,” she added, walking out, probably to give us some sibling time.

Nick waved his hand dismissively. “It won’t take long,” Nick assured her, still looking at me, his hands still resting on my shoulders, squeezing them gently. “Anyway, Fay, all we want to say is that we know you’re a smart girl, pretty solitary and stuff but…”

“But guys will say and promise anything just to get in your pants,” Mick added bluntly.

“Dude!” Nick chastised with a glare before wincing and nodding in agreement. “Well, I wanted to say that more… ummm… less… crudely but he’s right. Men are evil, Fay; don’t trust them,” he added, squeezing my shoulders again.

“Well, if you are so worried about me, maybe you should have tried to convince our parents to keep me here!” I finally snapped. It was easier to feel angry than let myself be submerged by the disappointment of being let down by the two people that were supposed to love me the most.

Hurt flashed in Nick’s eyes and I felt guilty almost immediately. “We tried to, but they said you had to go that—” he started sheepishly, almost whispering.

Mick cleared his throat loudly, sending a warning glance to Nick, a look saying, ‘shut the hell up!’

I frowned, looking back at Mick. I wanted to know what was wrong, but the car honk prevented me from finding out.

“You better go, baby sis.” Mick pulled me into a tight hug. “I love you,” he added, his tone carrying a tinge of regret.

“Call me if you feel bad or if you need something or if you just want to talk. No matter how insane you think it might be, I’ll be there,” Nick whispered in my ear as he pulled me to him for another hug.

I just frowned at the intensity of his tone. My brothers were light, laid-back guys, but not today, not as they were seeing their baby sister leave.

I took a deep breath and turned around to give them a last look before going outside. I forced a smile, showing them it would be alright.

“I love you two, doofers.” I tried to joke, failing miserably. If only they knew how much I was going to miss them. My brothers were my best friends.

I sighed, getting in the car.

“Come on, Fay, cheer up,” my mother said with slight annoyance. “You don’t know how lucky you are to go there. You saw it yourself; the biodiversity is amazing!” She turned around to look at me and gave me her usual motherly smile that always made me feel like a brat.

“I’ll be alright, Ma,” I said, looking at the sun playing in her hair, the exact same shade as my brothers.

I, on the other hand, didn’t inherit anything from my parents. They were both tall and I was short. I apparently looked a lot like my great grandmother Newman, but she died quite some time before I was born.

“It’s a brand-new life for you,” my mother agreed, straightening up in her seat. “You can start fresh… make friends.” She touched my father’s shoulder. “You know when I went to college I was terrified too, and this is when I met this lovely young man and look how it turned out.”

“Yeah…” I said, looking out the window to the well-known landscape I was leaving behind.

I was reluctant to admit it, but my mother was right. This was my chance to start over, to try to fit in… a chance to reinvent myself, but I was not sure I wanted to. I liked who I was.

Oregon State University here I come! I thought as my father took the exit to the airport.

I had the curious feeling that everything was about to change, much more than what was to be expected.

I was sure it was normal to feel that way when you left your nest for the first time, moving to the unknown with nothing familiar to hold on to.

What could be so bad at the university?