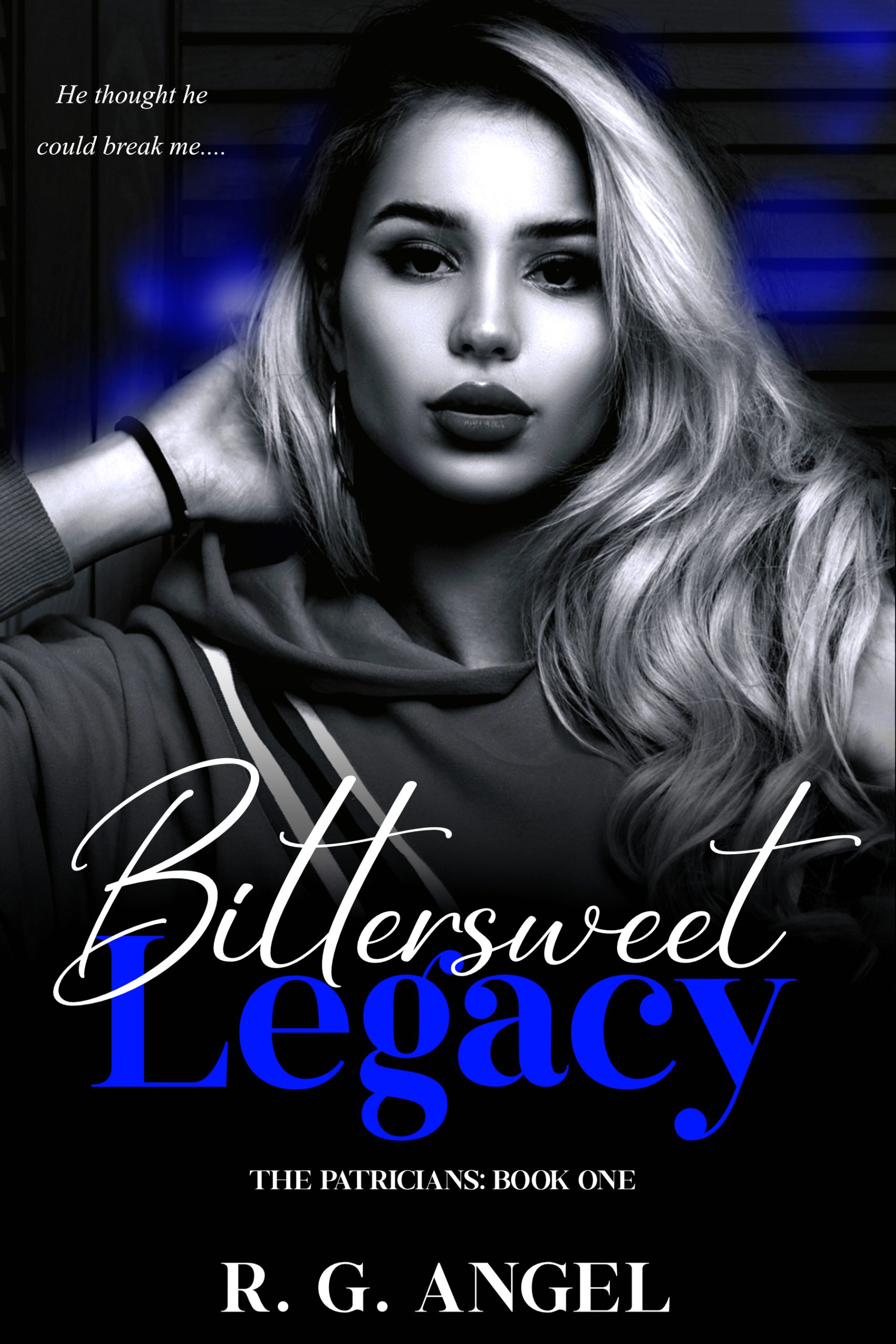 My whole life is nothing but a lie—the poor Esme Denver is gone, replaced by the heiress Esmeralda Forbes.

I’m torn from my ordinary life and thrown into a world full of money, hate, pain, and unspoken rancor led by a calculating, uncaring father I wished never found me.

This new life brings me a brother who hates me on sight and will stop at nothing to have me gone. There is also his frenemy, Caleb, who is as wicked as he is beautiful, and wants to punish me for making him feel.

They’re both on a mission to make my life living hell—at home and school—where they hold all the power.
But as the past reveals itself in ways I didn’t expect, I find myself in the middle of a swirl of lies, betrayals, conspiracy, and even murder.

What I need is to escape this golden cage to return to being the old Esme.

I must find a way out before it’s too late…

Sometimes you don’t realize when your life is about to change forever.

But sometimes you’re just there, sitting at the last bonfire of the summer, about to start senior year, thinking about when Ben DeLuca would finally stop the two years of slow-burn flirting and ask you out and your phone beeps with a text that would change your whole life.

I frowned; my dad was a lot of things but not melodramatic.

Why? I texted back.

I didn’t manage to protect you. I’m sorry Esmeralda.

“Esmeralda?” I frowned. Who the hell is Esmeralda?

I jumped from the log I was sitting on. This sounded too much like my drunk dad, a version of him I thought disappeared over five years ago.

I started around the camp, calling my friend Juliet, my ride home, who would probably not hear me over the pounding sound of Fall Out Boy.

I turned around, charging toward the car park, hoping I could beg someone to give me a ride.

I turned around but kept on walking backward as Ben jogged toward me, a drink in each hand.

“I was just coming to find you.” He extended a solo cup. “It’s alcohol-free, I promise.”

If I hadn’t been so worried, I would have smiled. With all the girls here, he was seeking me out with his broad shoulders, dark eyes and dark hair.

“No, I – My dad’s – ” I shook my head. My father was his football coach. How could I tell him I feared my father was drunk? Making the same mistake he swore he would never make again when he uprooted us from Boulder, Colorado, to Columbia, Missouri, in the middle of the night?

“What about your dad?” He took a step toward me, his eyebrows etched in worry.

“Yeah….” He winced. “I saw her leave with Drew and Topher toward the beach so…” He rubbed his neck.

“Oh,” I blushed at the implication. “I really need to get home.”

He rested the drinks on a rock nearby and pointed to his bike. “Let me take you. I’ve got a spare helmet.”

I stared at his Ducati. How many girls dreamt about getting on the back of his red and silver bike? I dreamed of it too – but not like this, not with the fear in the pit of my stomach that something was terribly wrong.

I looked around the parking lot but there was no one around.

He took my hand, pulling me toward his bike. “Tell what?”

He put the helmet on my head, securing it tightly. “Of course, always.” His chocolate eyes reflected the sincerity of his words.

“Dad, he’s…” I was not even sure; I just had this uncontrollable dread filling my lungs with ice.

“It’s okay.” He straddled his bike, adjusting his own helmet. “Hop on.”

Once again, I was grateful to have ignored Juliet and her advice to wear a skimpy dress and worn my skinny jeans and combat boots instead.

The fifteen-minute ride to my house seemed never-ending, and I didn’t even get the chance to enjoy the firmness of Ben’s body or my first ever trip on the back of a bike. No, all I could think about was why my dad would drink again and what situation I would make it back to.

The scene when we arrived at the house didn’t ease my stomach. The car was parked crookedly, halfway between the driveway and the lawn, with the driver’s side door open and the keys still in the ignition. The front door of the house was slightly ajar.

I grabbed the car keys, closed the car door and took a few tentative steps toward the house, taking a small breath to settle my nerves.

I stopped when I heard footsteps behind me.

“What are you doing?”

Ben frowned at my tone. “Coming in with you.”

I shook my head. “No, I needed a ride, and you provided me with that ride. Thank you but –”

He pointed a finger at the door, a deep scowl on his face. “If you think I’m going to let the girl I like walk in a place without knowing what to expect.”

“Listen, it’s…” I began before taking a step backwards in surprise when I fully registered his statement. “The girl you like?”

He looked heavenward with a heavy sigh. “Maybe not the best moment for revelations is it?”

I shook my head. I will kill my father for ruining this moment for me. “Just, please don’t judge.”

Sadly, the vision I walked in on wasn’t unfamiliar even if it hadn’t happened in some time.

My father was lying on his stomach, an empty bottle of vodka on the floor beside a puddle of vomit.

I crinkled my nose at the once-familiar, and never fully forgotten, stench of alcohol and vomit mixed together.

“Please go Ben,” I implored. “I can deal with it just – just don’t tell, OK? I’ll explain to you on Monday at school. I promise.”

Ben looked down at me, and the worry mixed with pity in his eyes was the nail in my coffin. I wasn’t sure I could forgive my father, not again.

I shook my head, my eyes burning with my unshed tears. “Please…” I croaked.

“Call me if you need anything.”

When he was gone, I took the mirror out of my bag and brought it close to my father’s face. I’d learned from my past mistakes and I would not lean down to check his breathing – his drunk-sick breath used to almost knock me out when I was a kid.

I sighed in relief when the faint fog of breath coated the mirror – at least he only drank himself into a stupor and not to death.

“You promised, Dad,” I whispered as my eyes started to water. I cried for him never getting over mom’s death. I cried for a mom who died giving birth to me and I cried for myself and the life I had.

I opened the windows, letting the blinds down to get rid of the pungent, sickening smell which would need at least a couple of moppings with bleach to eliminate it.

I picked up the bottle and wasn’t even surprised to find discarded empty beer bottles in the sink and in the trash.

“God damnit, Dad!” I cursed, throwing the bottle so hard in the trashcan that it shattered the glass.

I turned toward my father, surprised that this ear-shattering noise didn’t even manage to get a stir out of him.

“Why?” I asked, staring at my snoring father, once I was finally done with the cleaning,

I looked at the clock and it was past 2am. At least I didn’t have to be at work before the afternoon.

I set a glass of water and two ibuprofens on the coffee table before begrudgingly resting a blanket on his motionless body, and sat heavily on the table, facing him.

I ran my hands over my face and let out a weary sigh. Perhaps part of my leniency for his behaviour came from two things – one was the love and attention he had always given me. We never had much, him being a single father living on a meagre high-school football coach’s salary, but he never made me feel the lack of money. Our places were always small and sparse but he made sure to buy me nice clothes, sending me to dance lessons and had even set up a college fund which wasn’t big, but he had been trying.

He had really turned over a new leaf when we left Boulder. I wasn’t entirely sure what had happened but part of me suspected that his drinking problem hadn’t gone unnoticed and that he feared social services would take me away. The fear of losing me had been enough to get him out of his alcoholism and to start fresh. I might have second-guessed a lot of things in my life but his love for me was never one of them.

And the second reason was the guilt I couldn’t help but feel. He repeated, time and time again, that I wasn’t to blame for my mother’s death, but how could I not feel guilty when her death was so intrinsically linked with my life?

I let out a tearless sob. I was just too tired and stressed to deal with all that and couldn’t help wondering what life would have been like if mom hadn’t died.

“No, not anymore Dad. You promised.”

“I couldn’t protect you from him. I failed. He found you.”

I leaned closer, trying to ignore his breath. His eyes were closed. I was not even sure he was awake.

“Who?” I rested my hand on his shoulder and jerked him softly. “Who found me?”

“Your real father.” He replied.