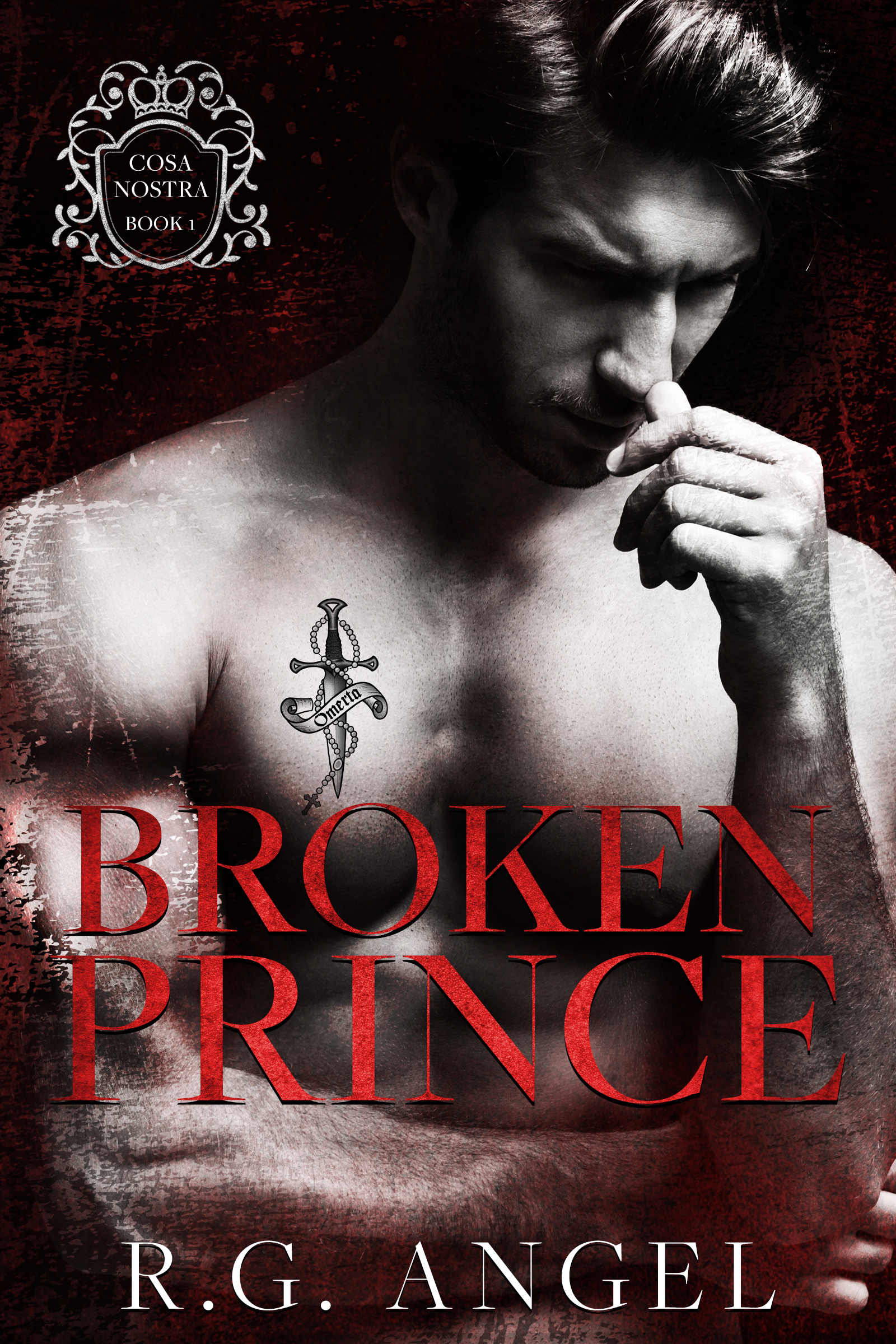 Being the daughter of the Riverside monsters is a heavy cross to bear, one that twenty-one-year-old Cassie West can’t escape. But first she needs to get her ten-year-old brother out of social care.
Social pariahs can’t be choosy and she finds a job as a live-in housekeeper at Hartfield Manor—a cursed job that no one wants.
But as the days pass, she is intrigued and determined to figure out who is the man in the shadows. The mysterious owner of the manor whose obvious pain resonates with hers.

How the mighty have fallen.
Luca Montanari turned from an adulated powerful mafia underboss to a recluse, clinically alcoholic beast with a death wish in the blink of an eye.
All he wants is to be left alone, to soak in his pain and guilt—in his own version of purgatory—until Cassie West enters his life. She is everything he doesn’t want and everything he needs. The fiery redhead starts to bring back to life parts of him he wanted dead. The closer she gets, the harder it is to remain the ghost he’d become.

Who better than the daughter of monsters to love a beast?

They say everybody wants to be famous, be on the covers of the newspapers. That any press is good press, but that is a load of crap!

The press had been nothing but a curse for me and my little brother, Jude. We were Cassandra and Jude West, the children of the Rivertown Murderers.

These people… My parents used their small investment firm to embezzle the retirement funds of more than fifteen thousand people in ten years and they had also murdered thirty-two elderly people in an attempt to cover their tracks.

My face, half hidden behind my messy red hair as I walked out of the court during the trial, even made the first page of our regional paper and I had wanted to disappear on that day. I was not going to court to support them. I was going there—I was not sure why I was going there.

Maybe part of me hoped they would have the decency to apologize to me and Jude for destroying our lives and making us pariahs because the stigma we were carrying was a heavy cross to bear.

I let out a sigh of relief when my father was sentenced to life without parole and my mother to forty yearsI was there to make sure this whole nightmare would finally end and they would end their lives behind bars.

I didn’t miss the glares directed my way by the families of the victims every time I took my seat in the back of the room. People didn’t believe that the twenty-year-old daughter of these two sociopaths didn’t know something was wrong, and even if I genuinely had no idea, I couldn’t help but feel guilty. Had I missed anything? Were there signs?

When I exited the court after the verdict, I looked at my watch and groaned. I only had one afternoon with Jude per week and this final day of trial stole two precious hours from it.

It has been four months since my life—our lives—spiraled into hell. We had no other family and social services declared I was not fit to take care of my brother and I couldn’t deny it. I was broke; I had to drop out of nursing school, and I was now sleeping on the uncomfortable futon of our old maid who was one of the only people showing me a little compassion.

I rushed to catch the bus. I had to get to the Home soon as visitation ended at five p.m.

Seeing my baby brother only an afternoon a week was breaking me. I missed him so much and I was worried sick; he was only ten, way too young to have to deal with all of this.

No one should be dealing with all of this.

When I arrived, Amy, the social worker dealing with Jude’s case, was pacing in front of the door.

“I thought you would not make it,” she said, pulling me into the visitation room.

“I know!” I gasped breathlessly. “Thank you for waiting.”

She gave me a small smile. “You deserve someone cutting you some slack,” she said gently, bringing tears to my eyes.

I was so unused to kindness recently. I had been lucky when she had been assigned my brother’s case. We’d been in the same high school even if she had been a senior when I joined and it created a sort of kinship that I was beyond grateful for.

She opened the side door and spoke to someone; the door opened wider and my brother rushed in.

“Cassie!” he shouted, running into my arms.

I hugged him tightly. He was so short and frail. He might have been ten, but he didn’t look older than seven. He was my little man though; our parents had always been emotionally distant. It has always been Jude and me.

“I’m sorry. I didn’t want to be late,” I told him, caressing his dark-blond hair softly.

He kept his arms around me and lifted his eyes, looking at me with his big, sad green eyes—much too weary for a little boy his age.

“Are we okay now?” he asked with a small voice.

I nodded. “Yes, we are. They’re not coming back.” I frowned, noticing the small bruise on his jawline. “What’s that?” I asked, brushing my fingers on it.

I looked up to Amy who looked at us with so much sorrow it cracked my heart open even more. I had to get him out of here.

No, you’re not. You’re miserable, but you’re trying to be strong for me when you shouldn’t have to, I thought. “I know but I miss having you with me so I want to get you back as soon as possible.” I forced a smile I hoped looked genuine. “Who’s supposed to help me sample brownies now, huh?”

I looked up and she looked really crestfallen. I was sure she had a soft spot for Jude, but then again, who didn’t?

I nodded. “I’ll see you next week and we can video chat this week sometimes,” I said before throwing a quick look at Amy who nodded. She did that every week for us, using her own phone to allow Jude and I to talk for a few minutes. That woman really was a godsend and at least she helped us make this horrible situation just a little better.

“Love you to the moon and back,” he said, hugging me tightly again.

“Love you to the sun and back,” I replied, kissing the top of his head, already feeling the burn of my unshed tears at the back of my eyes.

After he left, Amy turned toward me.

“What really happened?” I asked, knowing full well that Jude’s bruise was not an accident.

She sighed, shaking her head. “Kids have been tough on him,” she admitted reluctantly. “Being related to…” She winced. “It’s a heavy cross to bear.”

“I know. I’m planning to change our name as soon as I can get him back.” I sat on one of the uncomfortable orange chairs lining the visitation room.

I knew I had to leave. There was no reason for me to still be here; the center was now closed to the public, but I just needed a few minutes.

A few minutes with someone who looked at me, not as an accomplice to the monsters my parents were, but as one of their victims.

“I’m just not convinced that day will ever come,” I admitted, and saying it out loud hurt more than I anticipated.

“So they refused to take you back, huh?” she asked, coming to sit beside me, gripping my hand in hers.

I nodded. “Yes, I can’t blame them though. The hospital had a hard time justifying my presence there and since nursing school kicked me out.” I shrugged. “What was the point of me working there anyway?”

“We can fight their decision, you know. I looked into it and they had no grounds for dismissing you.”

I shook my head. “What’s the point? No one wants me there. The students look at me like I am a monster, the teachers too. And even if I force it, I need hospital training and no hospital will offer that to me.”

“Yeah.” She nodded with resignation. “What about your living situation?”

“Still squatting on Mrs. Broussard’s futon.” I’d never been more grateful in my life. Mrs. Broussard had been working for my parents since I was five years old and when everything turned to shit, she’d been the only one offering me the helping hand I desperately needed despite her own children’s advice. “I need to give her back her space and stop eating her food.” I looked heavenward. “Nobody is willing to hire me in this town but—” I looked at the door connected to the living quarters my little brother occupied. “I just can’t leave; he needs me.”

“You remember Ms. Lebowitz, don’t you?”

I looked at her with confusion at the change of subject. “The high school career counselor?”

She nodded. “She retired but I know she’s working part-time for the temp agency by the pharmacy.” Amy shrugged. “She always had a soft spot for her old students. Why don’t you go see her?”

Ms. Lebowitz had been an older lady, an eccentric hippy, but she’d always seen more than she let on. She had known even then that I’d been the one caring for Jude. She was the one who suggested nursing school after seeing my caring nature.

“I like her. It’s worth the shot.” I looked at my watch; it was much past the time and I didn’t need Amy to get into trouble and have Jude removed from her care due to her involvement with me. “What about Jude and his bruises?”

“Don’t worry, I’ve moved him into a room with younger kids. He’s okay now.” She answered my unspoken thoughts.

I threw her a grateful look. “I need to go now. I have to grab my bus.”

“Let me drive you home, please.”

I nodded. The bus ride to Mrs. Broussard’s was going to take more than forty-five minutes, and I had to admit that, after the draining day I had, I was more than grateful to accept.

“Why are you so nice to me”? I asked Amy as we took to the road. “Not that I’m not eternally grateful but—p”

She shrugged. “Call it empathy. I’ve seen you before at the hospital; you genuinely cared about the patients, and the way your brother talks about you? You’re his whole world. I’ve seen a lot of mean, heartless people in my line of work and you’re not one of them. You’re caring and loving and so obviously unaware of your parents’ monstrosities” She threw me a quick look full of concern. “You don’t deserve to be treated the way you are so if I can help ease this injustice just a little…I will.”

Yes, tomorrow was another day and I would turn the tide, no matter the sacrifices.